International stocks have lagged their U.S. counterparts since the end of the last recession in 2009 by a significant amount, but last year both developed international stocks and emerging market stocks beat the S&P 500.  This caused many investors to jump into international stocks, yet this year, overseas markets are once again underperforming.  Let’s take a look at international markets to see if they belong in your investment portfolio.

The chart below shows the return of the S&P 500 vs. the MSCI All Country World ex-U.S. index over the past twenty years.  Looking at the period from the end of the last recession in 2009 shows a significant outperformance by U.S. stocks.  There are several reasons for this.  The U.S. has had a much faster and stronger recovery since that time due to a variety of factors and its stocks deserved to be priced at a premium to companies located in countries that became mired in double-dip recessions and chronic high unemployment.  Foreign central banks were late in responding aggressively to the market turmoil and their economies lagged behind the U.S. 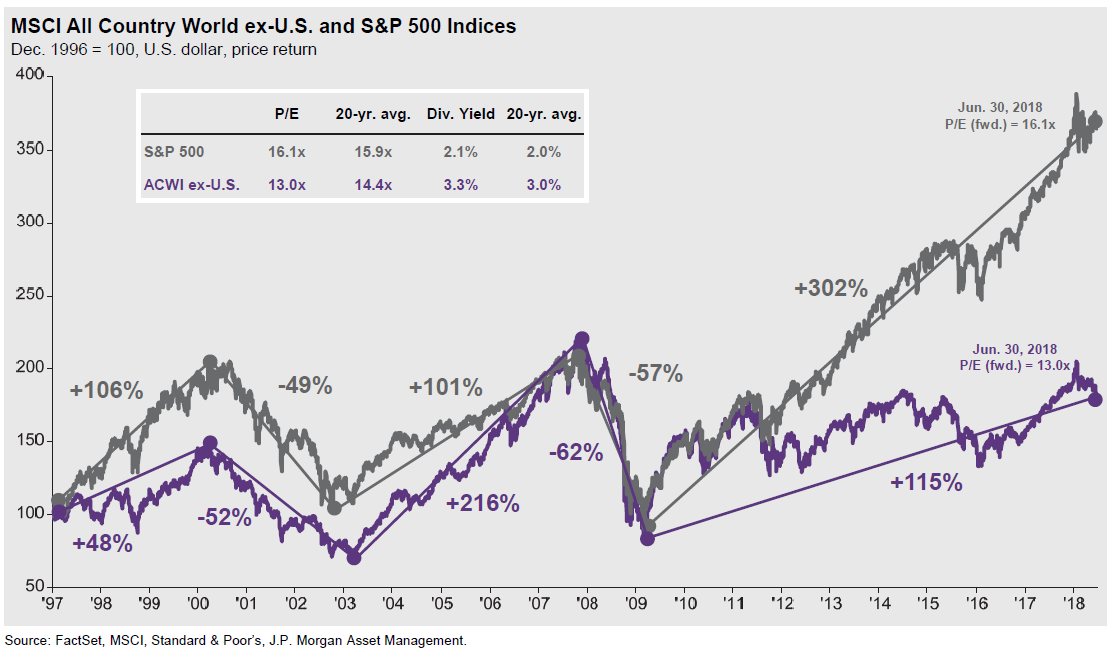 Now, the tide may be turning.  International economies have regained their footing and some are now growing at a faster rate than the U.S.; unemployment is declining in Europe; and international corporate earnings are strong.

The chart above shows price return on the major indexes, but it also notes valuation levels in the box in the upper left.  The forward price-to-earnings (P/E) ratio for the S&P 500 is just about at its 20-year average which implies that stocks are fairly valued in the U.S.  That same figure for the international index is significantly below its 20-year average for the international index, implying that there is room for price increases in foreign stocks, even after the strong gains in those markets in 2017.

It hasn’t been easy being an international market investor this year.  There have been several developments keeping international markets down.  Uncertain trade policies have hampered international firms, which typically rely more on exports than U.S. firms do on exports.  Uncertainty typically leads investors to seek safety in assets like U.S. Treasury bonds and the dollar.  A stronger dollar reduces the gains U.S. investors realize when they convert foreign profits back to the U.S.  In addition, recent financial problems in Turkey led to concern about emerging markets, causing a brief selloff in those markets.

The key to successful investing in international markets is to think long-term.  The dollar is strong now, but it is unlikely to stay strong forever.  Once it begins to weaken, U.S. investors in international stocks stand to benefit.  Emerging markets are broad and diverse.  Problems unique to one country are unlikely to significantly impact every developing country around the world.  In general, the middle class is growing rapidly in emerging market countries and will help drive their economies higher over time.

With U.S. stocks near record highs and bond yields expected to rise, we often hear people asking where they can invest their money when everything is so expensive.  The search for relative value leads to international stocks.  We don’t have the luxury of waiting for the world to be perfect before we invest in it.  The road may be rocky but we have to invest in the world as it is rather than as we wish it would be.