Last year’s extreme market fluctuations provided an interesting case study in the benefits of asset diversification. While the market in general ended with solid gains for the year, few expected that to be the case when the S&P 500 was down more than 30% in March.

The S&P finished the year up 16%, but that index, covering large capitalization U.S. stocks, was not the best performing asset class of 2020. That distinction belonged to small cap stocks, represented by the Russell 2000 Index, which jumped 18%. The performance of the asset classes varied dramatically during three distinct time periods last year so let’s break it all down by looking at the S&P 500, the Russell 2000, developed-country international stocks (MSCI EAFE), emerging market stocks (MSCI EM) and U.S. bonds (Bloomberg Barclay’s U.S. Aggregate).

The S&P 500 was coming off a strong 2019 in which it surged 31.5% to make it that year’s top performing asset class. It continued to lead in the early part of 2020, rising 4.8% to record highs by the middle of February. Bonds were performing well with a 2% gain and small caps were also positive. EM and international stocks were down slightly, continuing their trend of underperformance from the previous two years. 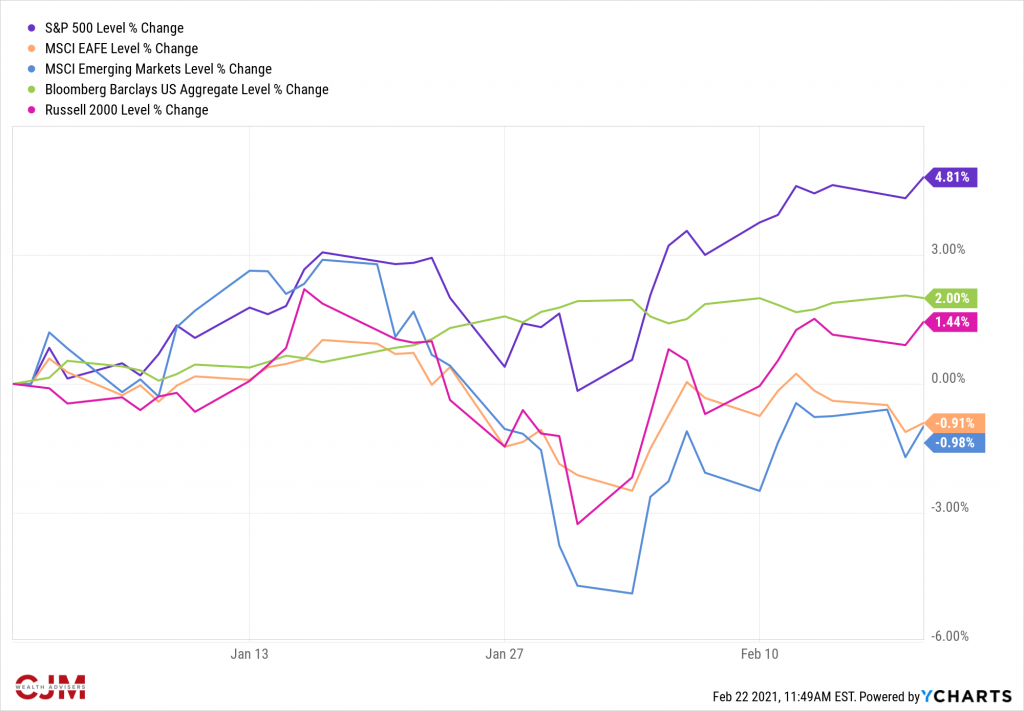 On February 20th, the selloff began – slowly at first, then quickly and dramatically. Small cap stocks suffered the worst, plunging 41%, while the S&P 500 lost a third of its value by the time the market bottomed on March 23rd. International and EM stocks did only slightly better, with both down more than 30%. Bonds, which had been one of the weakest-performing assets in 2019, held their ground and slipped just 1%, making them by far the least bad option for investors. 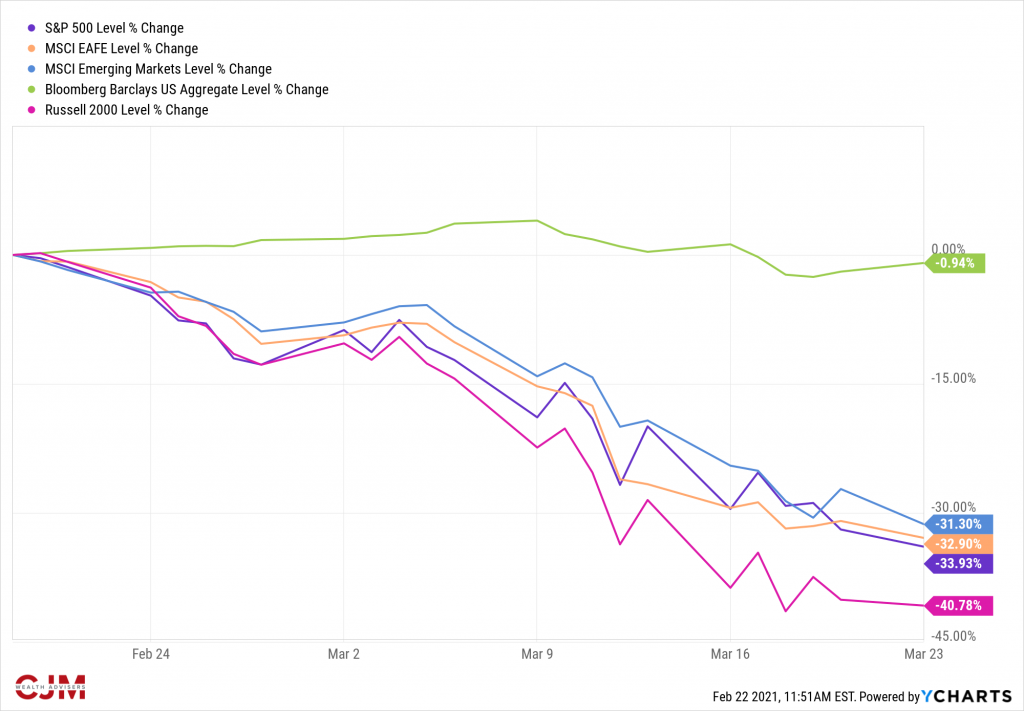 The Federal Reserve stepped in to calm the markets on March 23rd and touched off a remarkable rally that lasted through the end of the year. This time, small caps dramatically outperformed. With the outlook for economic growth improving, smaller stocks suddenly looked less vulnerable and investors piled in. The Russell 2000 surged 97%, essentially doubling in value, from March 23rd through the end of the year while the S&P 500 jumped 68%. Emerging markets stocks also did extremely well, slightly beating the S&P with a 70% gain. Bonds had much less ground to make up after March’s selloff and gained only 7%. 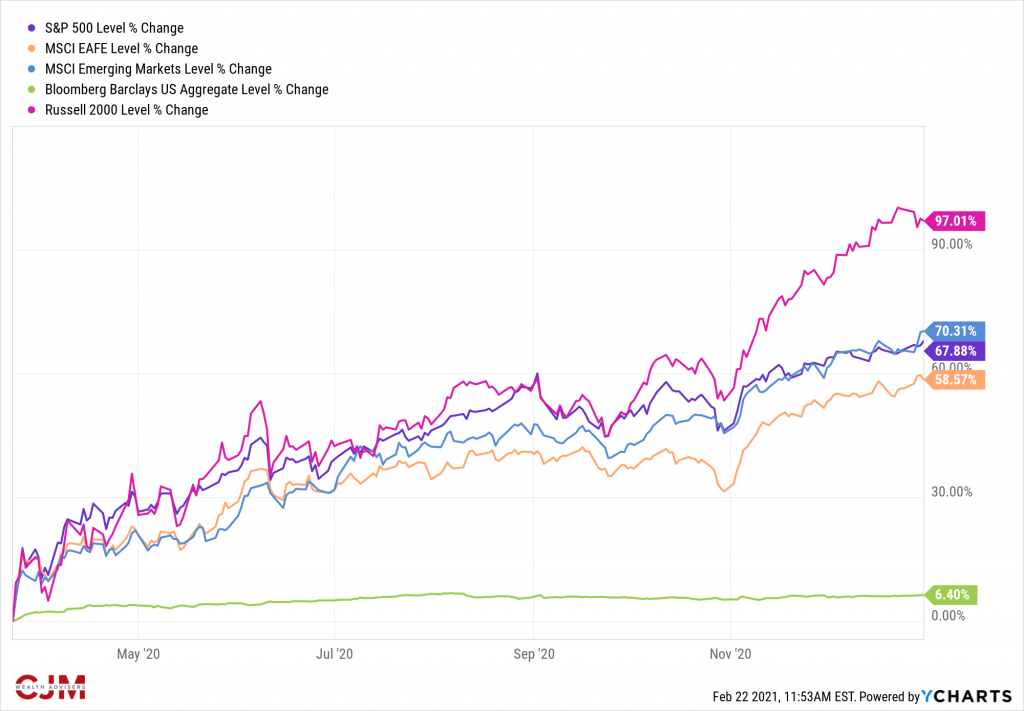 Putting it all together, the chart below shows the performance of each class for the entire year. Small caps ended up as the top performer, but not by a significant amount. The S&P and emerging markets index ended up neck and neck, followed by bonds and developed international stocks. Keep in mind these are index numbers and our developed international funds did much better with gains ranging from 15% to 37%. 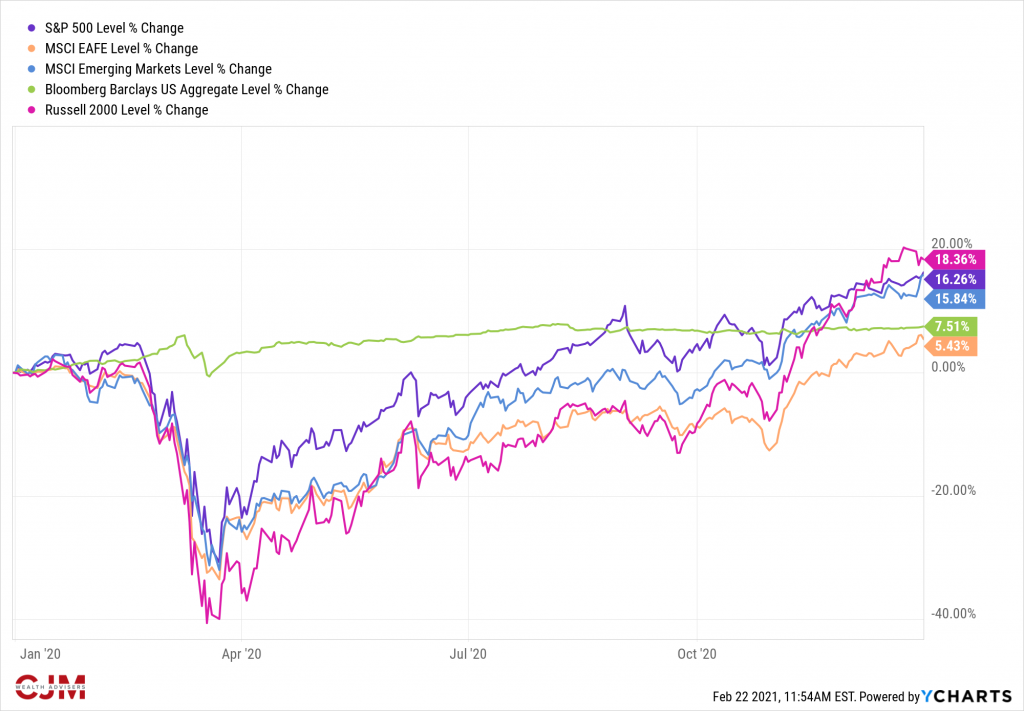 These charts help illustrate why we hold diversified portfolios.  We want to be invested in small cap stocks because the upside when the market is rising is tremendous, but we don’t overweight in the category because the downside risk (that 41% drop in March) is also high. Emerging market stocks also offer the potential for excess returns but carry higher risk so we keep a modest allocation there as well. International stocks don’t always move in step with U.S. stocks so there are additional diversification benefits to holding them. Looking back over the past 15 years, the S&P 500 was the top performing asset class in only one of them – 2019.

No one was feeling the least bit confident about small cap stocks (or anything else) on the morning of March 23rd, yet that was the best day to invest in years. We don’t know when those turning point in the market will occur so we maintain our asset allocation to take advantage of periods of outperformance by each asset class.