Stock Market Returns When a President Runs for Re-Election

Home•Stock Market Returns When a President Runs for Re-Election

Stock Market Returns When a President Runs for Re-Election

As America turns its attention to the Presidential election, we are hearing some concerns from clients about what the outcome may mean for their investment portfolios. In a previous article, we looked at whether the market historically performed better when either a Republican or a Democratic president was in office. The short answer was: it did not really matter. Stocks performed slightly better when a Democratic president was in office, but the difference was not significant enough to make any definitive determination.

The old saying that the market hates uncertainty can be applied to elections. Generally markets are more uncertain before an election than before, say, an inauguration day because by the time a president is sworn into office it is generally known what the policy goals will be and how they will or will not impact companies. We will look at market performance for the one year following each election to see if any reliable conclusions can be drawn.

Unfortunately, the S&P 500 has only been around since the early 1950s so we will have to use the Dow Jones Industrial Average as a measure of stock market performance before that time. Beginning with FDR’s victory over Herbert Hoover in 1932 (a Democratic victory over a Republican incumbent), there have been 22 Presidential elections. The average one-year performance after every election was a gain of 6.8%, but returns varied widely from a 55% gain for the year after Roosevelt’s first election victory to, coincidentally, a loss of almost 29% for the year following Roosevelt’s second election victory in 1936.

The following chart lists the market returns for the period following each presidential election since 1932. The elections in which a sitting president ran for re-election are highlighted in blue. 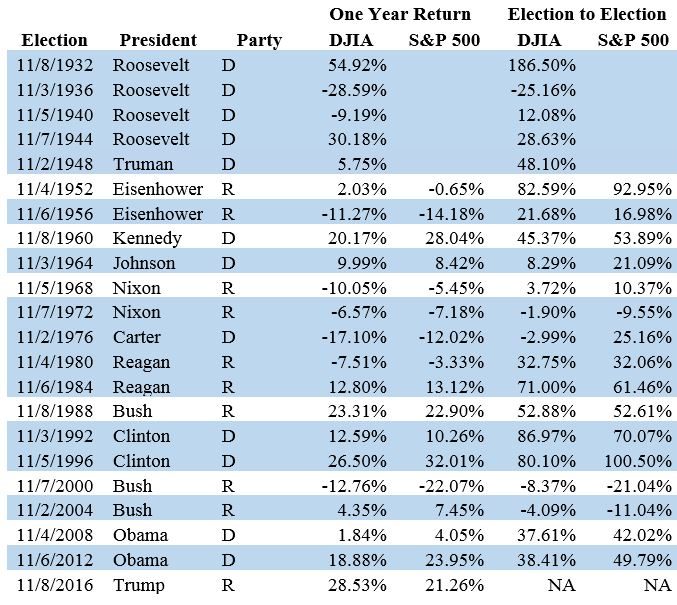 If we look at four-year returns from election day to election day, the average was 37.8%. Again, results varied widely, and Roosevelt had the biggest moves. Stocks soared 187% from his first to second election day, then dropped 25% from his second to this third election as the country struggled to recover from the Great Depression.

There were 15 elections since 1932 in which a sitting president was seeking re-election and the one-year Dow Jones Industrial returns were similar to those above at just over 6%. If we look deeper, things get more muddy. The average return for the Dow for the ten times the incumbent was re-elected was 4.7%. For the four times the incumbent lost, the Dow did significantly better over the next year with a gain of 10.7%.

If we look at S&P 500 returns, however, the numbers are switched. The S&P index only goes back to Eisenhower’s first term, so Roosevelt’s big numbers are excluded. The average one-year return for the S&P 500 for the seven times since 1956 the incumbent was re-elected was 9.1%. For the three times the incumbent lost, the S&P fell an average of 1%.

Things look worse if we narrow it down to re-elected Republicans. The average one-year performance following a Republican incumbent re-election victory was a loss of 0.2%. For the years in which a Democratic candidate unseated a Republican president, the average Dow Jones Industrial Average return was more than 16%, while the S&P 500 averaged a loss of almost 1%.

It is hard for a challenger to unseat a sitting president if the economy is in good shape. While each of the four elections in which the incumbent lost had its own unique geopolitical issues impacting the race, economic difficulties, like we face today, were a part of all of them. Roosevelt obviously came in at the worst time – the middle of a global economic depression. Jimmy Carter beat Gerald Ford during a time of rampant inflation where people were reduced to wearing Whip Inflation Now buttons in the face of rapidly rising prices. Carter, in turn, lost to Ronald Reagan after being plagued by continuing inflation and high unemployment. Bill Clinton ousted George Bush during a recession.

Unfortunately, we cannot draw a conclusion from these numbers because the sample size is so small. Should we judge Democrats by Roosevelt’s 55% first-year gain, Carter’s 17% first-year loss or Clinton’s 13% first year gain? Should we judge all Republicans by the only President of that party to defeat an incumbent over the past 90 years? If so, then Ronald Reagan’s 8% loss doesn’t speak well for his party. The market is not as interested in or tied to politics as many assume.

We don’t advocate making changes to your investments based on any potential election outcome. There will likely be volatility leading up to the election, but once the results are known and certainty returns, the markets should resume along their normal course. Your portfolios are designed to be invested for the long term, which should give you one less thing to worry about during this crazy year.