It has been an unsettling few weeks for all of us as we adjust to new home-bound routines and try to fill the hours of the day while monitoring ourselves for any symptoms of the Coronavirus. We sincerely hope this message finds everyone well and in good health. In this message we will focus on the extraordinary economic and market effects of the battle against the virus rather than the disease itself and give you our thoughts on the eventual recovery.

The unprecedented effects of social distancing on the economy have been especially damaging to the financial markets, which only adds to the unease of this uncertain time. We’re not going to sugar coat it – we are in a bear market and the economy is almost certainly in a recession.

The stock market ignored the Coronavirus while it was ravaging China and set a record high on February 19th before the reality set in that it would have a major impact on the U.S. economy. The chart below shows how far each of the major indexes fell from the highs to the recent low on March 23rd. International and emerging market stocks did marginally better than U.S. stocks during the selloff.

If the magnitude of the stock market decline is dramatic, the speed of the drop from market high to bear market territory was historic.  It only took 16 trading days for the S&P 500 to go from record high to down 20%, the faster bear market on record. 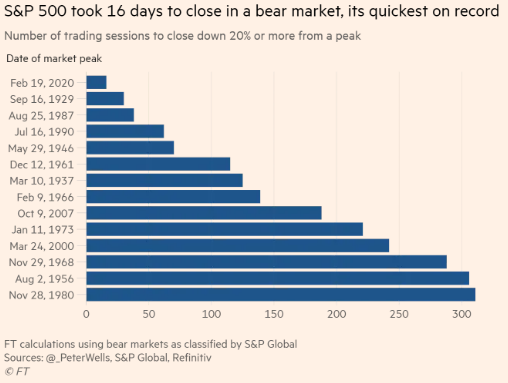 The following charts provide a quick view at how much activity has slowed down for hotels and restaurants, how it is rising for grocery delivery services and how much commute times have decreased in a matter of days. 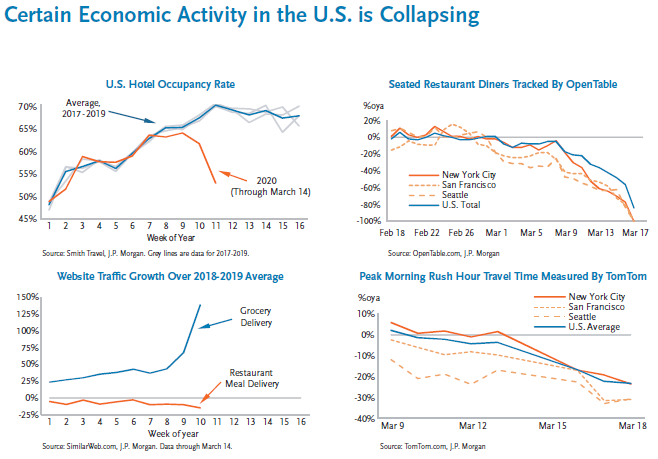 The U.S. economy is now predominantly a service-based economy rather than manufacturing-based, which makes the current social distancing phenomena so harmful and is causing some economist to predict that the economy will shrink in the second quarter by a 20% or more annual rate. That’s an eye-watering figure to be sure, but before we start to dread another 2008 Great Financial Crisis scenario it is important to point out some differences between that crisis and this one. 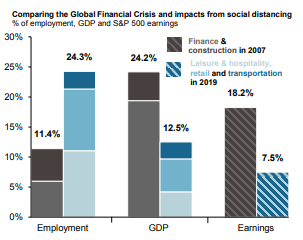 The underlying cause of the Great Recession on 2008 is absent this time around.  Banks are in good shape and consumers are not overleveraged.  The cause this time is the complete evaporation of demand caused by shutting down businesses to help fight the spread of the virus. Once we reopen our society, demand should return, perhaps gradually at first and then more rapidly as people become more comfortable and the pent up demand for leisure activities is unleashed.

There is another issue at hand that has complicated the economic outlook – plunging oil prices.  Soon after the market hit its high in February OPEC failed to agree on production cuts and Saudi Arabia ramped up production causing a steep decline in oil prices. 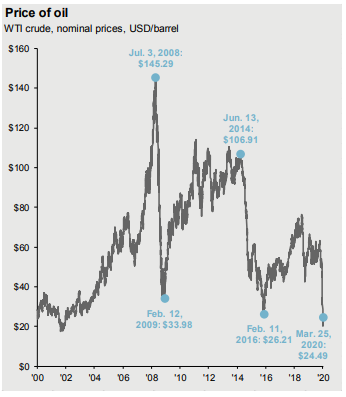 With oil prices this low, many producers can’t make a profit.  Looking at the performance of different industries of the S&P 500, it is the energy sector that is performing the worst by far, losing over half of its value since January. 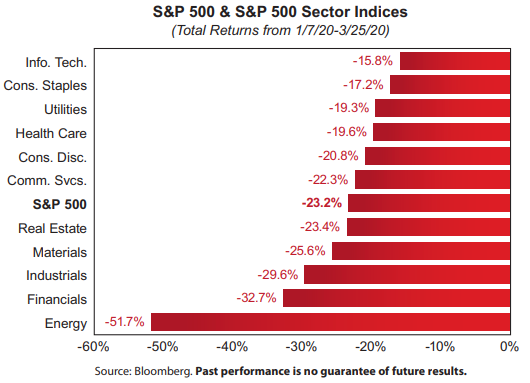 The combination of service-based employees being abruptly thrown out of work and, to a lesser extent, layoffs within the energy sector led to a huge increase in unemployment.  We have never even come close to the more than 3 million initial jobless claims that were filed for the week ended March 31st and then that number doubled this week with more than 6 million initial jobless claims.  Just three weeks ago the number of jobless claims was 211,000, close to the lowest number in 50 years.  Unemployment numbers are expected to continue to rise. 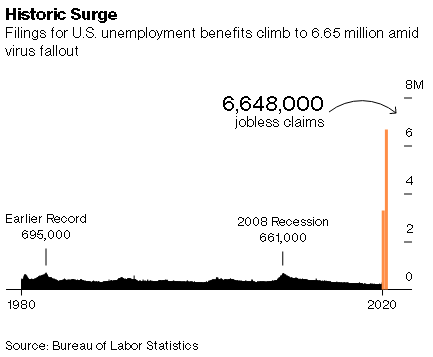 All is not lost for the economy. We should take some comfort in the fact that we have been through many recessions before this one. Although we can’t predict how long this one will last, recessions are usually relatively short-lived compared with the expansions that precede and follow them.  Since 1900, on average recessions have lasted 15 months while expansions have lasted 48 months.  Since 1950, the number look even better with the average recession lasting 11 months and expansions lasting 69 months. 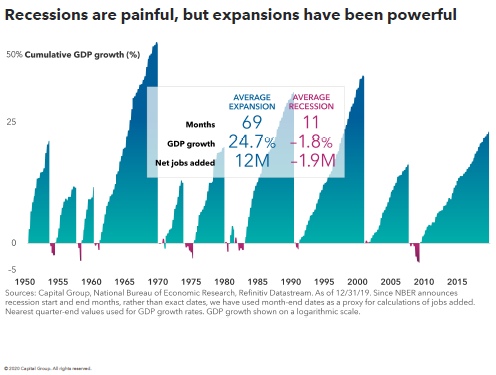 It’s worth noting that the stock market usually begins to recover before the economy is out of a recession, as the chart below shows. 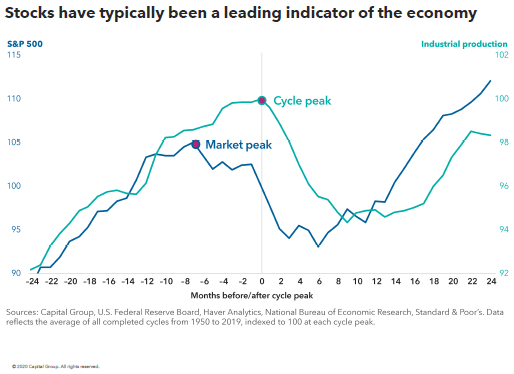 Staying invested, although painful on a day-to-day basis is a winning strategy over the long term.  No investor is able to call both the top or bottom of any market.  Missing out on just a few of initial up days at the bottom can cause dramatic long-term portfolio underperformance. Despite some severe selloffs over the years, stocks have risen over time. Having a long-term diversified allocation allows us to lessen the impact of the periods of negative performance so that there is less ground to make up when markets begin their inevitable recovery. 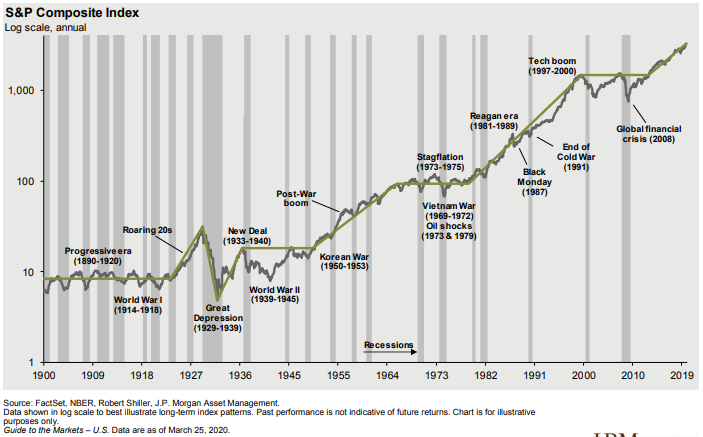