The Next Recession – A Look Back

Home•The Next Recession – A Look Back

The Next Recession – A Look Back

Recession talk has been all over the news after the U.S. experienced its second consecutive quarter of negative GDP growth recently. Two quarters of decline has been the shorthand definition of a recession, but there is more to it than that. Officially, the U.S. economy is not considered to be in recession until it is declared by the National Bureau of Economic Research (NBER), a group of economists who look at many different measures such as employment levels, industrial production, retail sales and personal income to make their determination.

We use the term business cycle to describe the evolution of the economy over time as it moves from expansion to recession and back again. This term may give the impression that expansions and recessions last roughly the same amount of time and everything balances out in the end. In fact, expansions last significantly longer than recessions as shown in the first panel of the chart below from JPMorgan. 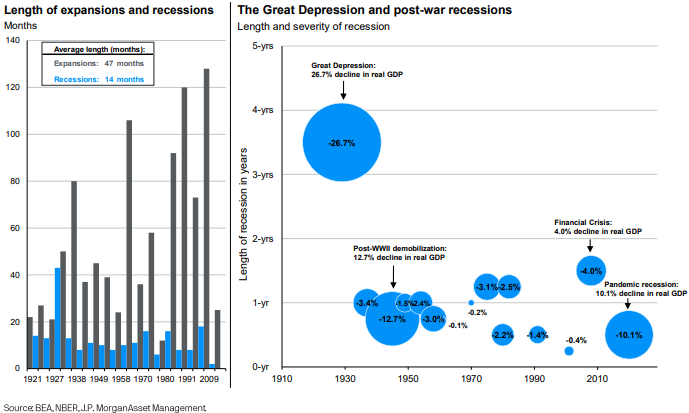 Going back to the early 1920s, the average U.S. recession lasted a little over a year at 14 months. This ranged from the nearly four year Great Depression to the blink-and-you-missed-it three month Covid recession of 2020. The blue bars in the chart show that every recession other than the Great Depression was under 20 months in duration.

There are areas of overvaluation in the market today that could suffer in a recession. Housing has been rising dramatically, but we are not seeing the kind of reckless lending to underqualified buyers that caused the last housing bubble to burst. The stock market decline this year has brought valuations down close to their historical averages. There is a lack of obvious imbalances or bubbles in today’s economy that need to be deflated and would cause a massive drop in GDP, which leads economists to expect that the next recession will be a milder, more historically average one.

Recessions are never pleasant to live through, but they are relatively short-term events that act as resets for the ensuing, longer-lasting economic expansions. As long-term investors, we have seen many business cycles and believe that holding diversified portfolios of investments can help weather any downturn while enjoying the gains from the return to economic growth.