Ukraine and the Market: Past Crises Call for Keeping Long-Term Investment Strategy

Home•Ukraine and the Market: Past Crises Call for Keeping Long-Term Investment Strategy

Ukraine and the Market: Past Crises Call for Keeping Long-Term Investment Strategy

Before we dig in, we want to take a moment to recognize the tragic loss of life due to the conflict.  While portfolios will likely recover over time, the loss of life is irreversible.

Russia’s invasion of Ukraine has added to the market volatility that was already heightened due to high inflation, the expected interest rate increases by the Federal Reserve and the economic disruptions caused by the Coronavirus. This is certainly a very unnerving time with major geopolitical implications. However, we have managed through past difficult times as investors, as a country and as a global community and we are confident we will do so again.

For investors, looking at other major crises over the last 80 years provides some idea of how the market reacted to similar situations and the investment impact over time. The following table shows how the S&P 500 performed on the day major events occurred, how far down it was at its lowest level after that and how long it took the market to recover. In most cases the decline was relatively mild and the recovery was swift. 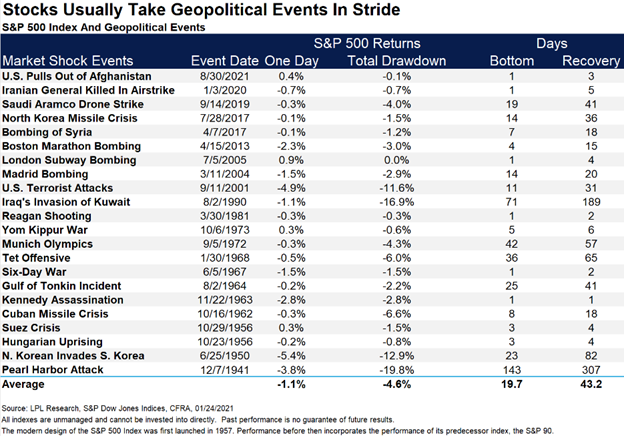 The worst drawdowns occurred after events that led directly to the U.S. going to war – Pearl Harbor, North Korea’s invasion of South Korea, Iraq’s invasion of Kuwait and 9/11. The U.S. has said repeatedly that it has no intention of going to war with Russia over Ukraine but would impose sanctions instead.

The Ukraine crisis comes at a time when the S&P 500 is experiencing a correction (down more than 10% from its high). We’ve grown accustomed to steadily increasing markets since the Coronavirus selloff, but corrections have historically been fairly common occurrences, happening once or twice a year on average. The table below shows how the S&P 500 has done in various time periods after it had fallen 10%, going back to 1928.

On average, the S&P 500 has recovered nicely after entering into a correction. These numbers are averages and not all periods were positive, but as you can see on the bottom line, one year after the correction the S&P was positive about two-thirds of the time.

We wanted to put the recent events and market performance in perspective to let you know that reacting to headlines about current events is not a good long-term investment strategy.  We do not believe that the geopolitical situation, as troubling as it is on a humanitarian level, warrants a shift in our long-term investment allocation.