It has been seven years since we emerged from our last recession.  The broad stock market indexes have performed extremely well over that time to reclaim their record highs but one sector stands out by leading all other asset classes in returns for five of the past six years and through the first half of 2016 – real estate investment trusts (REITs). 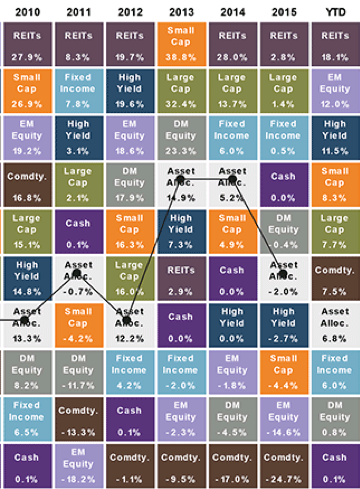 REITs invest in all areas of real estate – apartments, retailers, hotels, healthcare facilities, warehouses, etc – and have benefitted as real estate values and occupancy rates have improved during the current ongoing economic recovery and expansion.  An extra boost has been provided by the requirement that REITs must, by law, pay out at least 90% of their income to shareholders as dividends.  Since bond yields have been so low for so long, investors have looked to REITs as a source of additional income.  Another feature of REITs is that they tend to have lower correlations to other sectors of the stock market, so they provide a diversification benefit while still acting and trading like stocks.

The two main areas of attractiveness for REITs are also the two major areas of risk for returns going forward.  First, the economic expansion we have experienced since 2009 has probably been the least respected recovery we have seen in our lifetimes, even though it has been one of our longest.  Our GDP growth rates have been so low for so long that some feel we could be on the edge of sinking back into a recession.  While economic expansions don’t generally die of old age, recessions are typically bad for real estate values and occupancy rates.

Second, it is no secret that the Federal Reserve wants to raise interest rates.  As rates rise, the higher dividend returns offered by REITs become less attractive as fixed income yields begin to catch up.  REITs are more volatile than bonds, so having a more stable, slightly lower return may be more attractive for risk-averse investors.  Higher rates could cause investors to sell REITs, causing market values to decline.

Despite these two concerns, there are unique characteristics of the REITs market that may (I emphasize “may”) support REITs values going forward.  I’ll focus on three here:

It is important to point out that REITs have had a tremendous run since 2010 and no asset class outperforms forever.  However, during a period of historically low bond yields and with the economy slowly improving, REITs remain an attractive asset class for portfolio diversification.